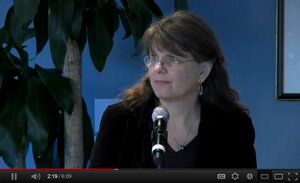 Recording of Live Chat with Ed Tick and Kate Dahlstedt, May 23, 2010

War and the Soul: Mature Warriors, September 9, 2009
On "Why Shamanism Now?" with Christina Pratt

Interview and call in show with Ed Tick.

The Warrior Priest, on "Not Alone", 2009
John Fisher, DC, spokesperson for Soldier's Heart

John Fisher talks about his time in Vietnam, and how he came to understand PTSD as an injury to the soul.

Healing PTSD with Ed Tick, produced by the Theosophical Society in America

The FuturePrimitive.org podcasts are dedicated to assisting people in participating in the shift that is occurring at this moment in our way of life. We as human beings are experiencing a renaissance of awareness that is taking place as we dream it together.

Dr. Tick speaks from his award-winning book War And The Soul about his groundbreaking work in healing of veterans. "We can create reconciliation and restoration practices that directly redress the wounds against life that oppress the veteran... Then the spirits that were loosed during the war - whether of the survivor or the slain - may find peace, meaning, and lifelong alliance. Then the veteran may make the return journey home and the healer too will be transformed."

Intro by Carla and Eric; Dr. Edward Tick, author of War and the Soul, talks about healing of nation's veterans from Post-Traumatic Stress Disorder.

Click here to listen to audio.
Go to It Takes a Village site.

Global Spirit broadcast exploring forgiveness and healing on a personal and societal level, illuminating how spiritual practice and compassion can aid us on this most critical of journeys. Host Phil Cousineau host. Ed Tick and his wife Kate Dahlstad take a group of traumatized Vietnam War vets back to Vietnam to help them learn the art of forgiveness - specifically, how to forgive themselves for what they did at war almost 40 years ago.

Click here for link to video at Global Spirit site.

Between the election and the economy, news about the war in Iraq has become scanty-at-best. And what little coverage there is tends to focus on developments overseas. In this Veterans Day special, the History Guys look at what happens when vets return home. Sons of Confederate Veterans spokesman Frank Earnest makes a case for separating the politics of war from our remembrance of its veterans. Historian Rebecca Jo Plant discusses the changing expectations for veterans' wives and mothers. And psychologist Ed Tick talks about PTSD and how psychological trauma was seen in a pre-psychological age.

Click here to listen to show.
Go to BackStory site.

Post Traumatic Stress Disorder is generally classified as an anxiety disorder. But for war veterans, it can also be a disorder of the heart. "War injures the soul, distorts the heart, confuses the mind, ruins the identity." Psychotherapist and author Edward Tick, has been working with war veterans and Post Traumatic Stress Disorder for nearly three decades.

Click here to go to BPA site and listen to show.

Every culture has a responsibility to care for its warriors. Working with soldiers suffering from post-traumatic stress disorder, Edward Tick believes the United States can do better. In the September-October issue of Utne Reader, Tick writes about different societies' warrior cultures and how their ideas can help returning U.S. soldiers.

Click here to listen to interview.
Go to Utne site.

Interview with Edward Tick, Ph.D., about his innovative, holistic and spiritually-based model of Post-traumatic Stress Disorder treatment, based on worldwide research into war and the warrior tradition, to support the survivor in developing an enlarged and strengthened identity and spirituality that can carry, integrate and give meaning to the traumatic experience.